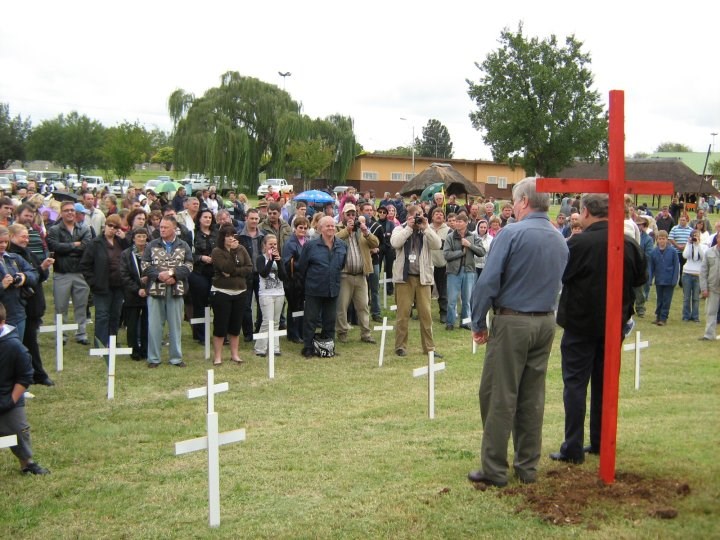 For those who want to know what the FF Plus is doing with regard to farm murders. We have been addressing this issue since 1997, read on and see for yourself:

1. The FF Plus succeeds in having the song “Kill the Boer …” declared hate speech.
When the ANC continued to sing the song in public, the FF Plus lodged a complaint about it in 2003. The process was successful and the South African Human Rights Commission declared that the slogan is hate speech. To this day, this verdict has been used in numerous other successful court applications and complaints by various other organisations.

2. A request for the death penalty as well as a Commission of Inquiry into farm murders.
After several speeches and political pressure, the Police appointed a Commission of Inquiry into farm attacks and murders in 2001. The FF Plus was the only party that made a submission to the Commission. The submission stated that farm murders are politically motivated and that the death penalty must be reinstated.

3. The FF Plus lodges a complaint with the United Nations Commission on Human Rights.
According to Dr Pieter Mulder, it is important to bring the problems of the Afrikaner to the attention of the international community. As a first step, in 2001, the FF Plus lodged a complaint with the High Commissioner of the United Nations Commission on Human Rights (OHCHR) regarding the lack of safety for the Afrikaner and farmers in South Africa. Thus the matter was brought to the attention of Ms Mary Robinson.

4. The FF Plus compiles a report on farm murders for Mandela.
In 1997, after constant complaints by the FF Plus, President Mandela asked General Viljoen, the then leader of the FF Plus, to compile a report on crime and farm murders. Viljoen involves Colonel Jan Breytenbach, former commander of the 32Battalion, in the process of compiling a crime prevention plan. The plan made provision for the establishment of rural structures against crime. Members of the Police did not like the plan because they feared a private army.

5. The FF Plus brings farm murders to the attention of American, British and German leaders.
During President George Bush’s visit to South Africa, Dr Pieter Mulder, the then FF Plus leader, handed a video to President Bush’s delegation on 8 July 2003. The video dealt with farm murders in South Africa. Likewise, on 14 July 2003, Dr Mulder personally handed over a copy of the TV program Carte Blanche, which also dealt with farm murders, to the Foreign Affairs Committee of the British Parliament in London. On 23 January 2004, the same video was also given to Gerhard Schröder, German chancellor, during his visit to South Africa. Mulder said that it is part of the FF Plus’s campaign to bring the “unacceptable high incidence of violent farm attacks and murders in South Africa” to international attention.

6. The FF Plus puts up a fight in parliament with questions and debates on farm murders.
The FF Plus put up a bitter fight against the abolishment of the Commando system. And every year, the FF Plus poses a parliamentary question on the statistics of farm attacks and murders. As a result, the Police were unwilling to disclose the statistics since 2007. The FF Plus, however, kept at it and the Minister has now undertaken to once again disclose the information.

7. The FF Plus draws the public’s attention to the murders and crime with protests.
The FF Plus regularly participates in protest marches against farm murders. On 21 March, as part of their protest action, the party planted 60 white crosses in Pretoria as a visual representation of the then murder figure of 60 per day. At every cross a pair of shoes was placed to show that someone’s place is now empty. On 27 April 2010, the FF Plus also planted crosses in Potchefstroom.

8. The FF Plus also brings farm murders to the attention of UNPO and the European Union Parliament.
In June 2012, Dr Pieter Mulder met with members of the European Union Parliament in Strasbourg for talks on farm murders. On 29 November 2012, he also put forward a motion regarding farm murders at the 11th UNPO Conference in Genève, which was unanimously accepted. Mulder is then elected to the presidency of UNPO and on 22 November 2013, he places farm murders on the agenda and it is discussed at the Conference. In 2015, another motion regarding farm murders is accepted at UNPO’s annual Conference in Brussels. This time the cruelty of farm murders is emphasised in particular. The FF Plus is doing everything in its power to bring the extent of farm murders and the fact that it is unacceptable to the attention of the international community.

9. Continuous Actions:
The FF Plus is the only party in parliament that keeps farm murders on the agenda by posing questions on the matter to the Minister of Police. Although the Minister initially undertook to once again disclose the statistics on farm attacks and murders after 2007, he did not keep his word. The FF Plus has been requesting that farm murders be declared a priority crime since 2008. The FF Plus was also the only party to submit a report on farm murders to the Human Rights Commission (HRC) in 2015.

10. Parliamentary Actions:
Since 1994, the FF Plus has served on parliament’s Police Committee where farm murders, rural safety, reservists, sector policing, farm murders as a priority crime and firearm legislation are continually on the agenda for discussion. It is generally known that the FF Plus takes up a strongly supportive position, especially with regard to firearm legislation, where other parties are usually sceptical. During the budget vote debates in parliament, the FF Plus places the abovementioned matters squarely in the spotlight. During the debate in 2015, the Minister of Police undertook to prioritise farm murders. The FF Plus was also the only party to submit a full report on farm murders to the Minister, which requested that farm murders be declared a priority crime, that specialist units be implemented, that statistics on farm attacks and murders be disclosed and that proper sector policing be implemented. The FF Plus is continually and diligently busy with such actions in parliament.

In 2016, as part of parliament’s Police Committee, the FF Plus succeeds in having the statistics on farm attacks and murders disclosed along with all the other crime statistics in South Africa.

In 2017, the leader of the FF Plus succeeds in getting the National Assembly to debate farm murders as a matter of urgent national interest for the very first time.

RT @GroenewaldPJ: #TatjanaSchoenmaker congratulations! You are star and you make us all very proud! / Baie geluk! Jy is ń stêr en maak ons…

The Mayor of the Ekurhuleni Metro Council, Mzwandile Masina, must focus his attention on the serious service delive… https://t.co/ZhT5DtVRR1