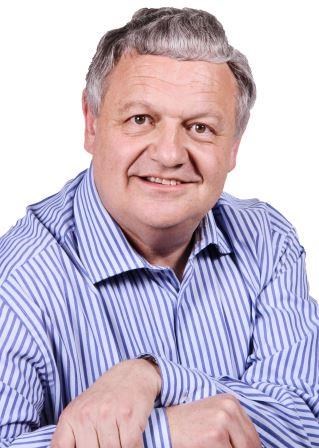 Dr. Pieter Mulder obtained a BA (Communication) degree at the Potchefstroom University for CHE and two years later his MA (Communication) with distinction. He was appointed as a lecturer in communications at the same university.

In 1978, at the age of 26 he obtained his doctorate in communication. In 1980 he was promoted to senior lecturer and in 1985 to professor and head of the department of communication.

His formal entry into politics was in 1988 as Member of Parliament for the Schweizer-Reneke constituency. In 1994 he was one of the founding members of the Freedom Front and in 2001 he was elected as Leader of the party. He was also elected to the executive management of the international organisation UNPO with its head office in Brussels.

Dr. Mulder was appointed as deputy minister for Agriculture, Forestry and Fisheries in 2009.

Dr. Groenewald is the Parliamentary Leader and Federal Chairperson of the Freedom Front Plus and provincial leader of the party in the North West.

He obtained his B.Iuris degree at the Potchefstroom University for CHE and completed a post-graduate diploma in communication. He obtained his master’s degree in management and development and a doctorate degree in political studies at the North West University.

Dr. Groenewald was elected as a Member of Parliament for the Stilfontein constituency and in 1994 he was a founding member of the Freedom Front.

Dr. Corne Mulder is the Chief Whip of the Freedom Front Plus in Parliament and also the Provincial Leader in the Western Cape. His formal entry into politics was in 1988 when he was elected to the Randfontein constituency.

In 1980 he obtained a B.Iuris degree at Potchefstroom University for CHE, with political science and international politics as additional main subjects. In 1982 he completed a LLB degree with distinctions in various subjects.

In 1984, at the age of 26 he obtained his doctorate (LLD) in constitutional law.

Mr. Wessels is the National Youth Leader of the Freedom Front Plus and in 2013 was elected to the Free State Legisllature.

He started working for the FF Plus full time in 2008 and in 2009 he was appointed as a Director in the Office of the Deputy Minister for Agriculture, Forestry and Fisheries.

He is a member of the FF Plus’ Executive Management, National Executive Committee, Deputy Leader in the Free State and is the party’s National Technical Election Manager.

Mr. Wessels is listed at the top of the FF Plus' candidate list of the Free State Provincial Legislature. He resides in Bloemfontein and is interested in technology, history and science.

Mr. Vorster was Mayor of Bloemfontein and has served his community many times as a DA Municipal Councillor. For many years he served on the DA's Federal Council. Until Monday he was the Chairperson of the Afrikanerbond and resigned as Chairperson in order for him to give his full attention to the election. He still serves on the organisation's National Council. He is prominent in the Free State's legal circles and has his own legal firm in Bloemfontein. He has B.Iuris, LLB and LLM degrees.

He was the Administrative Head of the Small Claims Court in Bloemfontein.

He resides on a farm outside Bloemfontein, is married to Alida and is the father of two children and grandfather of two grandchildren.

Dr. Bosman was a Member of Parliament for the Democratic Alliance (DA) for the past five years and was this party's Shadow Minister for Higher Education and Training.

His career started as a chemist (B.Sc. (Pharm) MPS) in Lichtenburg from 1965 to 1978. He also started a successful cattle and maize farm and has an extensive Brahman herd in the Warm Baths region.

Dr. Boshoff obtained a BA degree in 1992 at the University of Pretoria. In 1993 he moved to Orania.

He held various positions in agriculture and education over the years but has been a freelance researcher for the past five years.

Mr. Fourie has been involved in politics since 1962 and started his career as Youth Leader of the former United Party.

In 1981 he became a Member of Parliament for the first time and from 1992 to 1994 he was Minister of Regional and Land Affairs with the National Party.

Mr. Fourie became involved with the FF Plus in 2008 and has been the party's Councillor in the Cape Town City Metro since 2001.

Ms. De Lange started her career in Human Resources at JCI where she qualified as a psychometric specialist. She later joined Mondi Timber's mining section and started her B.Com studies in Business Management while she was part of a team that did product research and marketing.

She started her own flower farm with 18 tunnels and became involved in community safety and served as Chairperson of the Community Policing Forum. After resigning as chairperson in 2011 she took up the challenge of becoming involved in politics on a full time basis.

De Lange is a co-founder of the NABIFSA, a national security organisation. In 2013 she was appointed as the FF Plus Municipal Councilor in Mogale City.

Mr. Van den Berg was a Member of Parliament for the Democratic Alliance (DA) for the past five years and was the Shadow Minister for Communication, Arts and Culture.

He has had a successful career as a radio presenter, sports caster, producer and TV presenter and producer. He has a BA degree and HED which he obtained from the Potchefstroom University for CHE.

In his service period at the DA he was the Electoral Chief and Member of the West Rand Executive Management, as well as, Member of the Federal Council.

Mr. Mey was born in Willowmore district in the Karoo on 17 December 1948. In 1966 he matriculated at the Willowmore High School, where he was Head Boy. In 1966 he joined the South African Police Service and served in Pretoria, Johannesburg, Lusikisiki, Port Elizabeth and Western Area. During this period he studied at the University of Port Elizabeth where he obtained a B.Iuris degree in law.

He resigned from the Police with the rank of Lieutenant and has been working in real estate since 1980.

Since 2009 Mr. de Lange has been the FF Plus’s Councilor and Chief Whip in the Johannesburg Metro. Prior to his political career he was involved in the insurance industry.

He is currently the Chairperson of the party’s Financial Committee, Gauteng’s delegate to the Federal Council, as well as a Member of the Gauteng Executive Management of the party.

Mr. Weber is Leader of the Freedom Front Plus in Mpumalanga, was previously the Member of Parliament for the Wakkerstroom constituency and National Leader of the Afrikaner Eenheidsbeweging.

Mr. Van Staden is the Freedom Front Plus' Deputy Leader in Gauteng and the party's Regional Leader in Pretoria.

He is currently a FF Plus Councillor and Leader in the Tshwane Metro Council. He is also a Member of the party’s National Executive Council and Federal Council.

Mr. Robbetze was born and raised in Rustenburg, North West. He holds a National Diploma in health inspections and a National Higher Diploma in Public Health.

He resides in Margate on the KwaZulu-Natal South Coast, is married, has two children and five grandchildren.

Ms. Tammy Breedt is currently the FF Plus' Free State Youth Leader. She was born in Johannesburg and matriculated as the top learner at Linden High School.

She has been working for the Freedom Front Plus in Bloemfontein since 2009 where she offers support to councillors in the Free State. She serves on the Free State Executive Management and is interested in languages and culture.

Ms. Lourens is the Freedom Front Plus'Councilor for the Madibeng Local Municipality and has been seconded to the Bonjanala Platinum District Municipality.

She is a member of the FF Plus’ Executive Management in North West and is a secundus member to the party’s Federal Council.

Mr. Coetzee was a Member of Parliament for the Democratic Alliance (DA) for the past five years. He has a BA degree from the University of the Free State and is an expert in the field of credit management.

For a long period he served the DA in various positions and was, amongst others, a councillor of the Mangaung Municipality from 1995 to 2009.

Mr. Coetzee was a member of the Joint Standing Committee for Intelligence in Parliament.

He is an expert in the financial world with 55 years of experience and has been a successful businessman in Polokwane (Pietersburg) for the past ten years.

Prof. Snyman-Van Deventer has been a member of the Freedom Front Plus since 1994 and has served the party in various capacities.

She was, amongst others, a member of the Free State Youth Commission and has been aCouncillor of the Mangaung Metro Council since 2006.

Prof. Snyman-Van Deventer is an advocate and obtained her legal degree in 2001. She holds two maters degrees in law.

Mr. Marx matriculated at the President High School in Goodwood. He was project manager and business negotiator from 1999 to 2001 at Union Matex (GMBH), Germany.

He has been the Managing Director of Daedalus Aviation Africa since 2012 and the Chairperson of the Federal Alliance in the Southern Cape from 1999 to 2000.

Mr. Schutte is a member of the South African Institute for Civil Engineering. He holds a Higher Diploma in arbitration and is also a professional technologist.

He is the owner of his own engineering firm and acts as a technical advisor to the North West Department of Public Works.

He worked at Liberty from 2001 to 2006 and is currently working in theorganizationaloffice of the Freedom Front Plus in the Western Cape.

Ms. Nefdt matriculated at the Oranje School for Girls in Bloemfontein after which she obtained a B Soc. SC degree at the University of the Free State.

She followed a career in the South African Defence Force where she was a member of the permanent force and amongst others worked as a Liaison Officer. She completed four years of service on the border at Oshakati and resigned from the force with the rank of Major.

Ms. Nefdt has been involved with the FF Plus for the past 21 years, was a FF Plus Councillor in the Tshwane Metro Council and speaks fluent Sotho.

Mr. Van Niekerk is the Leader of the Freedom Front Plus in the Free State. In 2010 he was elected to the Free State Legislature and served as the Chairperson of the Portfolio Committee for Agriculture. He also serves as a member of the party's National Executive Council.

He was a founding member of the Freedom Front Plus on the campus of the University of the Free State. Under his leadership this student organisation won the student council elections twice. He started working for the FF Plus full time in 2006.