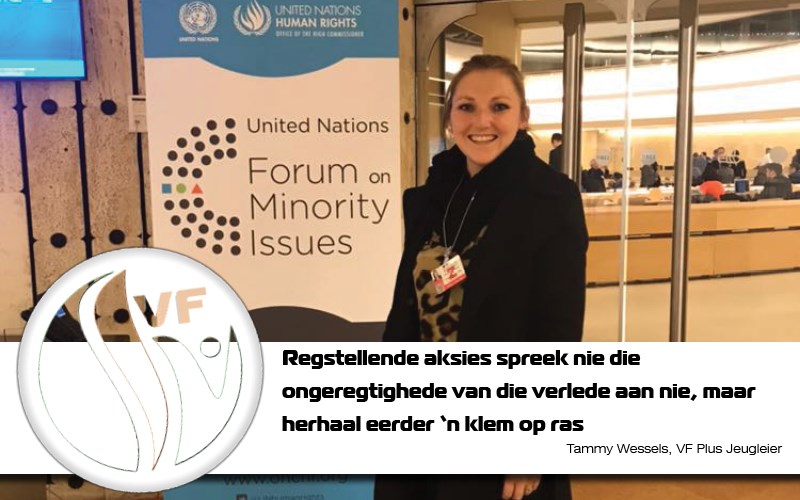 I represent the Afrikaner youth as the youth leader of the Freedom Front Plus – South Africa. I will add and reiterate much of what my colleagues from Afriforum have said, as I wish to bring a different perspective to what the representative from South Africa has said.

I would like to thank each and every person who made statements, remarks and the panellists for their words. As a minority youth in South Africa, it is welcoming to be reminded once again that we are not alone with the issues we face.

"A person is reduced to nothing but race and a quota – affecting the dignity of such a person."

Furthermore, Affirmative Action is not addressing injustices of the past, but rather repeating the emphasis on race.

" In particular, Afrikaner youth are being punished for something they had no part in."

A person is reduced to nothing but race and a quota – affecting the dignity of such a person.

AA and other racially based qouta systems which are applied to the allocation of bursaries are racializing South Africa. It discriminates against the minority based on the premise of an advantage enjoyed by the minority because of the political past. It is continuing 23 years after the regime change. Minority youth - a generation later - are being discriminated against because of a political system they were not part of.

The future looks bleak for our wonderful and diverse country if this system of discrimination continues.

Appointments are not made on the basis of merit but rather skin colour. The youth from minority groups, in particular Afrikaner youth are being punished for something they had no part in. Affirmative policies that are being enforced and strengthened in SA are not conducive towards a free society where group rights are respected.

@pierredevos I absolutely agree. However she is a most junior minister.