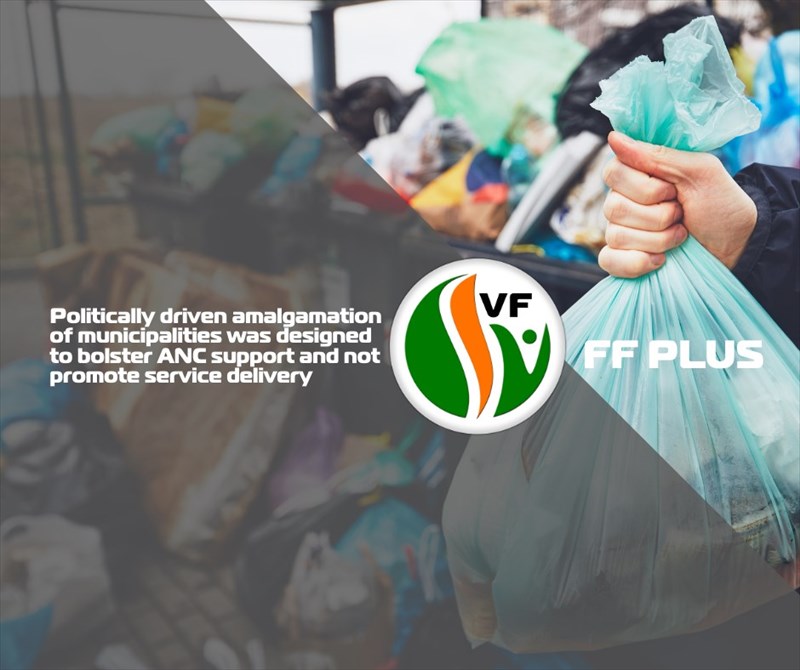 The week-long focus on local government in the NCOP has shockingly shown that many municipalities were forced to amalgamate with their neighbours only to drag the stable municipalities into a financially-deteriorating-whirlpool.

All the speakers during the week acknowledged that the amalgamation, which reduced the number of municipalities from 843 to 257, was a massive mistake that created more problems for local government than provided advantages. The intention was ANC driven political consolidation and not more efficient local government.

The FF Plus notes that the week’s proceedings have played out like a habitual criminal suddenly offering trauma treatment to his or her victims.

The ANC has also, in recent months, steamrolled the dissolution of local councils and the use of section 139 of the Constitution to place them under administration, despite clear evidence that this has not been effective. Section 139 of the constitution has been used in most cases to settle political infighting.

Even Cooperative Governance Minister Nkosazana Dlamini Zuma has admitted that section 139 interventions have been a failure. The administrators have been deployed like knights in shining armour but have left broken and bankrupt municipalities in their wake.

Councillors wanting to act against corrupt mayors, speakers and officials have been threatened and prevented from performing their duty in the interests of their councils and voters.

Even MPs, members of the NCOP, have been prevented from conducting oversight by ANC provincial MECs.

The culture of corruption has become a way of life for some. It is clear, the safest place for a hyena is either in its den or in the pack. Beware, they have a habit of turning on their own. The question is - who will be next?

Most NCOP members will agree the week’s session can be characterised as an alcoholics anonymous meeting where speaker after speaker has confessed to the problems and dysfunctionality of local government.

Political interference has been identified as one of the serious obstacles to effective service delivery. It was openly acknowledged that it is difficult if not impossible to manage municipalities effectively.

According to Businesstech South Africa faces a precipitous economic and political collapse by 2030, unless it changes its economic model and implements growth friendly policies. It further says that since 1994 the ruling ANC’s rejection of job-intensive growth policies was instead replaced with raising wages and subsidizing the poor through welfare.

Fanie du Toit - FF Plus MP in the NCOP