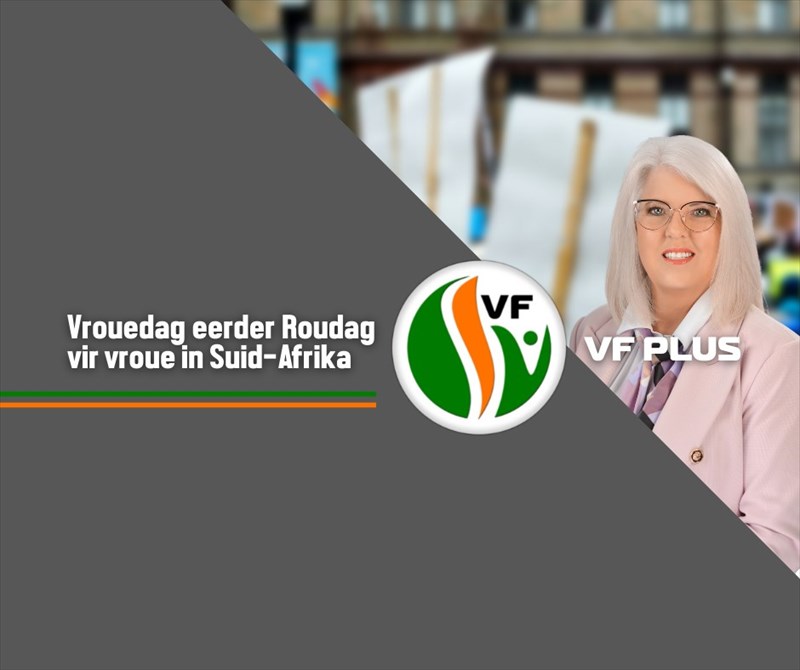 This year, South Africans are celebrating the 28th National Women's Day and on this special day for women, the FF Plus wants to pay homage to the women and mothers of this country.

They are the ones who, like the statue of the Women's Monument in Bloemfontein, are looking to the future, searching for the break of a new day.

The Women's Monument has become a symbol of the quiet, inner power of women who have a sound vision for the future and an unshakable faith in what is to come.

It portrays women as the pillars who were willing to cross the Drakensberg mountains barefoot in search of a better life in the face of others' waning hope and strength. They are the true builders of this country's future.

And yet, women's fundamental rights and freedoms are increasingly being violated and jeopardised by gender-based violence, which is getting out of hand.

Every year, the ANC government pays lip service by making pretty promises that mean nothing.

Rape, murder, domestic violence and human trafficking are increasing by the day in a society with crumbling morals and values.

South Africa has turned into a country where even the Minister of Police considers a woman lucky if she is raped only once.

The country urgently needs national policy on gender-based violence and gender equality that is effectively implemented.

Only then, President Cyril Ramaphosa and his government's constant promises about eradicating gender-based violence will be taken seriously.

In contrast to the ANC government, every rape of a woman is one too many in the FF Plus's view.

Poor conduct, like police officers failing to attend the murder trial of Meghan Cremer in the High Court in Cape Town yesterday, demonstrates the lack of accountability when it comes to such investigations.

After 28 years of ANC rule, the justice system is failing victims more and more. Everyone is aware of cases like Jaco Swart, who brutally assaulted his wife and was merely rapped on the knuckles with a R20 000 fine and a suspended sentence of five years.

Women must join hands and cooperate to create an environment where they are safe and free.

The FF Plus encourages women to report any and all cases of abuse, and to join women's organisations for support to escape from violent relationships.

Until a government comes into power that really protects and cherishes the country's women, they will have to stand up for themselves and break the vicious cycle of violence.