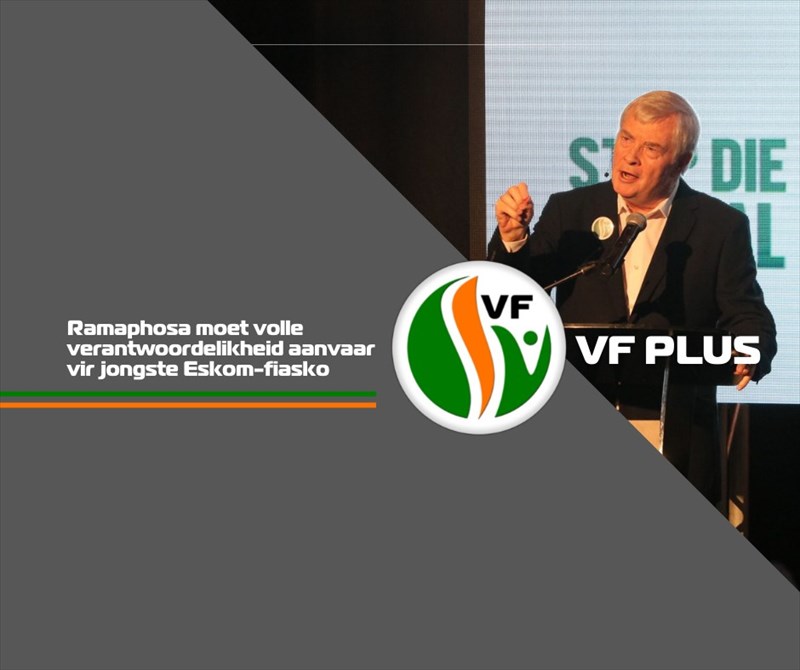 President Ramaphosa must accept full responsibility for the latest Eskom fiasco, which has once again plunged the entire country into a dark abyss of load shedding.

In 2014, President Ramaphosa was appointed as the chairperson of a special Eskom Committee – known as the Eskom war room – which was tasked with turning things around and preventing the possibility of future load shedding.

At that time, serious allegations of corruption with the construction of the Medupi and Kusile power stations also came to light.

In 2019, the President said in response to my question in Parliament that he had turned the "war room" over to Eskom seeing as the "immediate danger" of load shedding had been averted. And that was seemingly the end of any and all efforts to turn things around.

With load shedding, South Africa is reaping the bitter fruits of Affirmative Action (AA) and Black Economic Empowerment (BEE) – the government has now finally also admitted that cadre deployment has led to incompetence.

Kusile and Medupi were built with the aim of eliminating future power shortages, but these two power stations' long-term efficiency had been undermined by irregularities right from the start.

President Ramaphosa must, therefore, take full responsibility. In the past, he failed to execute a sustainable turn-around plan and now as President, he is failing to ensure that the problems at Eskom are addressed and resolved.

The recent power outages are having a severely detrimental impact on businesses that are already in crisis due to the pandemic and associated lockdown regulations. It also affects matric learners who have to study for their final exams.

Eskom was allowed to fall apart even though the government was fully aware of what was causing the problems, namely AA and BEE. And yet things were allowed to continue like that for years on end; Eskom was being destroyed before their very eyes.

The government also failed to provide alternative power sources even though several private power providers were quite willing to invest in the power grid. Their offers were turned down due to the ANC's ideology.

The FF Plus is of the opinion that Eskom can only be turn around if it is privatised at once. It cannot be put off any longer.