Home | Media Releases | President’s reply regarding energy: Circumstances are compelling government to do what FF Plus has been insisting on all along

President’s reply regarding energy: Circumstances are compelling government to do what FF Plus has been insisting on all along 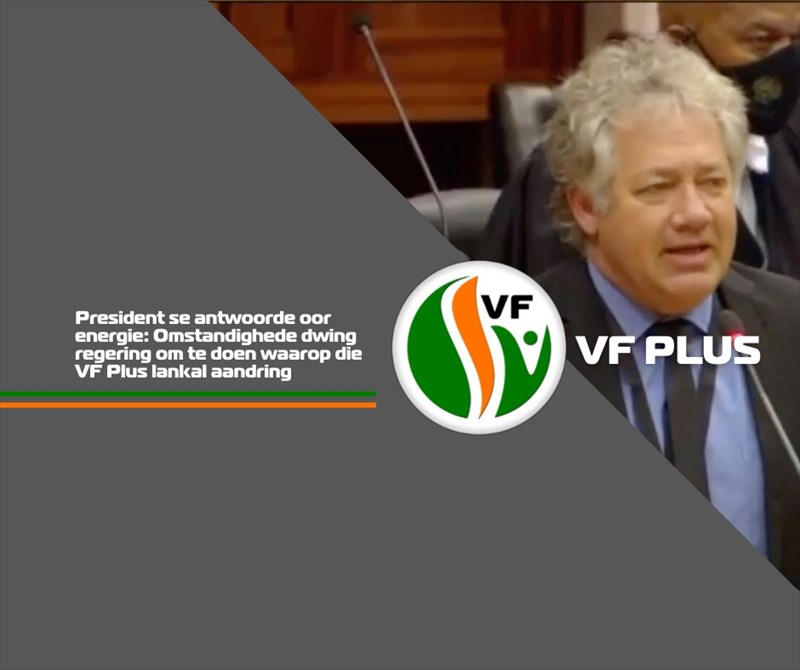 The President had nothing new to say about the matter, but he did discuss it comprehensively and in depth. All Eskom's major problems, ranging from the public enterprise's debt burden, outdated power stations, the dangers of a monopoly in power supply, climate change, the role of renewable sources of energy, contracts for emergency power supply and the social consequences of phasing out coal-fired power stations, came under consideration.

The context is that the ANC government has relentlessly been clinging to the principle of a single public enterprise with an electricity monopoly since 1994 and has used regulation to subdue other market forces in the energy sector.

After years of load shedding and looting of Eskom, it seems that the government has finally come to the realisation that Eskom cannot be turned around in its current unchanged state, that renewable energy financed by the private sector has the potential to save the South African economy, and that the country cannot afford to remain one of the world's top polluters.

Coming to these conclusions has compelled the government to change its course. Eskom will have to compete with other power suppliers and renewable energy will from now on have a significant role to play in the Integrated Energy Plan (IEP).

This new course of direction poses political risks, though. Great capital and labour interests have been securely established in the coal economy. And that is where the concept of a fair transition comes from; a transition that the government hopes will be financed by international role players.

During the debate, valid questions were asked about the fairness of the fact that the world's more developed countries are responsible for climate change through centuries of pollution, but that less developed countries must bear the weight of the consequences. That is why it is not unfair for South Africa to receive international aid in this regard.

The emphasis will be on re-training employees and making adjustments to power plants to pull them into the new energy economy. It will not only support employees, but save entire communities.

One false note in the President's reply was a stronger than warranted commitment to coal. To argue that the country will keep combusting coal for many years to come because the huge coal power stations of Medupi and Khusile were only recently constructed comes down to throwing good money after bad.

Rather than investing in these over-budget and overdue plants, investments must be made in research on hydrogen power – something that the President seems to be in favour of.

Ultimately, it appears that the government has finally started to see what the FF Plus has been advocating for nearly a decade: South Africa must transition from a dirty, centralised power supply to a clean, decentralised power dispensation. The country certainly possesses the expertise and resources needed to make a success of it.

Maybe the government is hesitant to part with the old energy dispensation because it fears the inevitable political consequences. It is old news that the centre-seeking forces in South Africa are very weak and that the country is barely being held together by wires – power wires.

For the FF Plus, which believes in peace and economic growth through self-determination, the new energy dispensation offers great possibilities.