Debate on greater autonomy for the Western Cape is becoming unavoidable 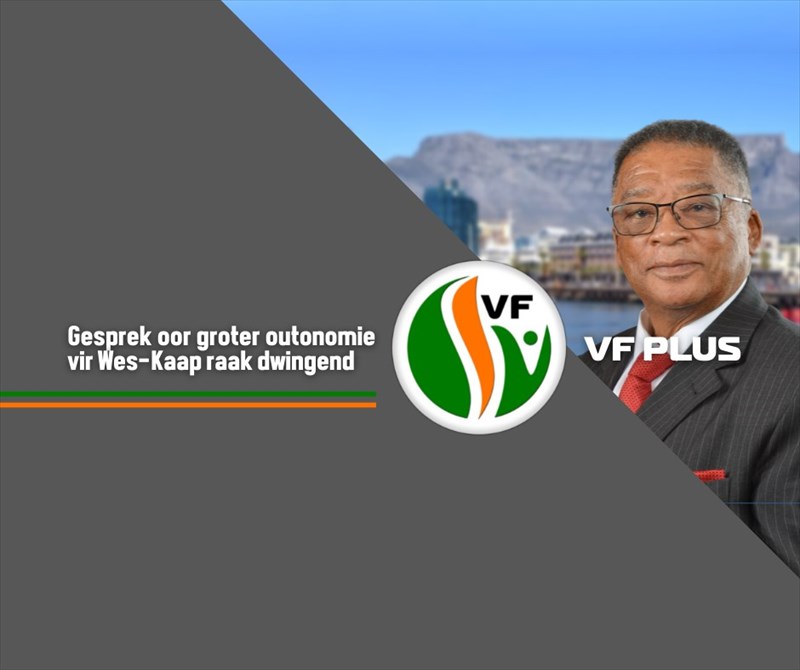 A conversation about greater autonomy for the Western Cape to have more say in its own affairs is imperative and realistic, and must be had in all seriousness and with an open mind.

The FF Plus's MPL, Mr Peter Marais, has, therefore, requested a debate on the matter in the Western Cape Legislature.

According to Mr Marais, his plea is a request for "political realism" where people with a vision for the future must break away from the old-fashioned concept of a majority government.

For the past 28 years, South Africa's government has been founded on a hybrid form of state of a union with federal characteristics. It has failed because nearly all the power rested with the central government while the provinces and local governments were completely at its mercy.

The centralisation of power resulted in poor service delivery, the abuse of power and large-scale state capture and corruption.

The provinces and local governments’ utter dependence on Eskom as sole electricity supplier and the country's dilapidated railway system are but a few of the numerous examples thereof.

Criminals no longer fear the police or the criminal justice system, there are serious shortages of expert police officers and medical personnel, and hundreds of informal settlements are springing up everywhere across the country.

It all paints an ominous picture of an increasingly failed state. South Africa currently finds itself in a serious predicament. It cannot be denied.

Affirmative Action (AA) with cadre deployment, which replaced expertise, has cost the country dearly. The general state of decay serves as proof.

The ANC has turned into a small, powerful group of privileged elites who exploit political power as a mechanism for enriching and benefiting themselves.

If the RET faction in the ANC does indeed succeed in usurping the power, the already desperate situation will deteriorate hand over fist.

It raises the question of where that will leave the provinces, and particularly the Western Cape. Clearly, total central rule must be done away with.

If the ANC is not removed from power in the next two years, the widespread service delivery protests in the country, such as those in July last year, could reach a point from which it will be very hard to turn back.

The desperation brought on by unemployment, poverty and crime very quickly reaches a breaking point.

The people of the Western Cape can prevent this from spilling over to their province by demanding greater powers, functions and self-determination, which can indeed be achieved in terms of Section 235 of the country's Constitution.

The FF Plus is not proposing a final "divorce" between the Western Cape and the rest of South Africa, but rather the reforms needed to devolve more powers to the provinces, and particularly the Western Cape.

It is, after all, not an impossible dream. There are numerous successful examples of this in Nigeria, India, Tanzania, Sudan, Germany, America, Switzerland and Belgium.

It is abundantly clear that the current system of cooperative governance, with the ANC in control, has failed South Africa and its people.