Ramaphosa’s acknowledgement of ANC cadres’ capturing of municipalities is astounding 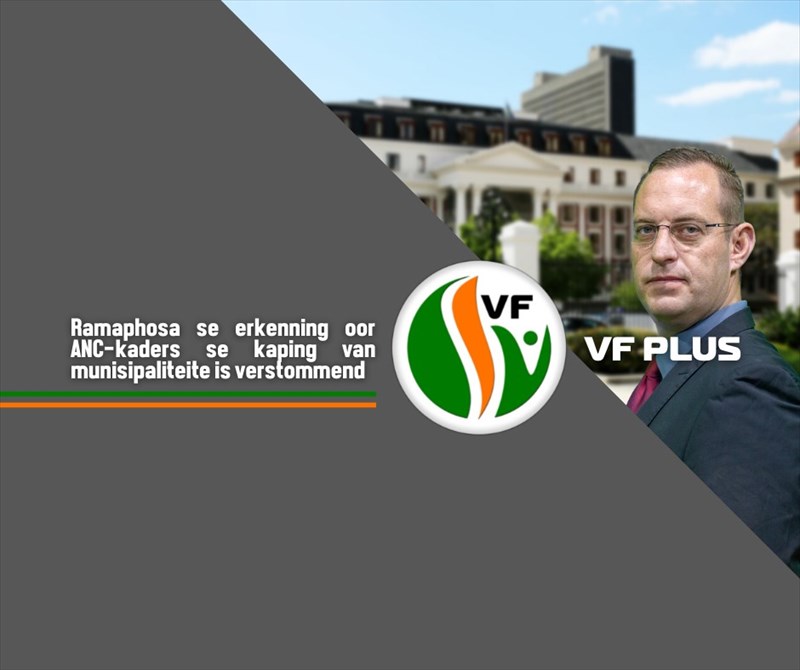 The FF Plus is astounded that President Cyril Ramaphosa is only willing to acknowledge the shortcomings and irregularities in the ANC now, after nearly a decade of serving as Deputy President and then President of South Africa.

The President is finally acknowledging that the people of this country are negatively affected by unprecedented levels of mismanagement, patronage or cadre deployment, incompetence and the literal capture of municipalities by criminals with ANC faction ties.

Yesterday during a South African Local Government Association (SALGA) Council of Mayors, the President highlighted these and other problems that threaten stability and economic growth.

The FF Plus has repeatedly been pointing out these issues on all levels of government for a long time.

Any objections to these abuses were frequently slammed by the ANC, and even other opposition parties, as being mere racist arguments.

The FF Plus is the only party that firmly maintained its stance against Affirmative Action (AA), ANC cadre deployment and mismanagement.

Even in the face of other party's hesitation to confront the issues outright for fear of being labelled as politically incorrect.

The President's statement that it is "shocking to hear that after nearly three decades, there are still councillors who are unable to read and write" is equally astounding.

It clearly demonstrates the chasm that has formed between the ANC government and the South African reality.

A serious shortcoming in the President's speech yesterday is that he failed to give any indication of what he is going to do to address these problems.

He announced no decisive steps, nor did he say what action will be taken against the guilty ANC cadres in municipalities.

A concerted intervention by all the law-enforcement agencies at government's disposal is the only way to stop criminality and ANC abuses in local government.

The FF Plus will continue to expose ANC abuses and will keep pressing for effective intervention for the benefit of all the people of South Africa.