President’s steps for addressing power crisis prove that government was caught napping: Too little too late 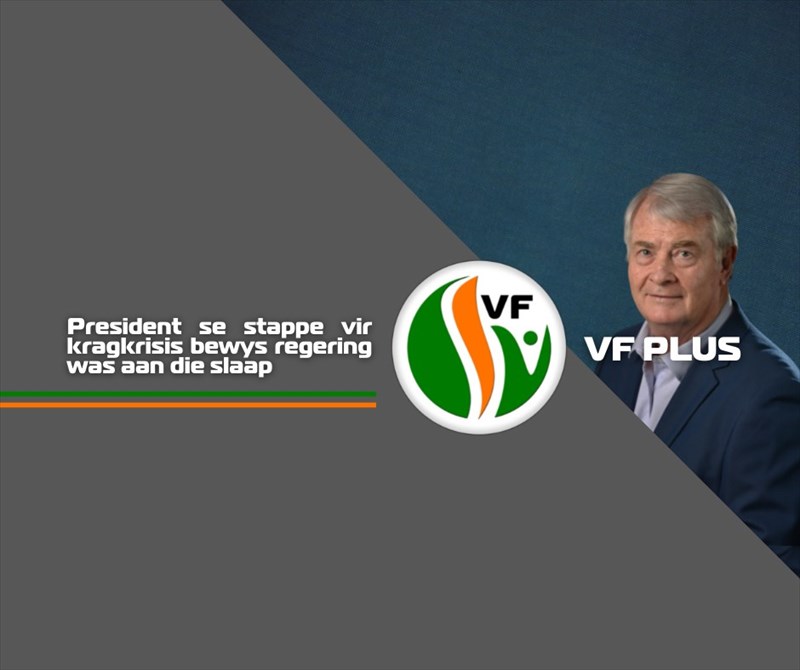 The FF Plus has always held the opinion that a state of emergency or disaster is not necessary to address the country's power crisis. President Cyril Ramaphosa's decision not to announce one was the right decision.

The steps that President Ramaphosa announced are steps that should have been taken a long time ago already. Eskom's power crisis did not arise overnight, but developed over the course of a number of years.

The leaders of various political parties met with President Ramaphosa yesterday morning to discuss the matter and I, among other things, asked that Affirmative Action must not apply when former Eskom experts are approached to help the power utility with its turn-around action. Merit should be the only measure.

Back in 2014, former President Jacob Zuma appointed President Ramaphosa (Deputy President at the time) as the head of the so-called war room which was tasked with ensuring that power supply problems do not arise in the future.

President Ramaphosa must, therefore, shoulder the blame for the current crisis, and for government dragging its feet and waiting too long before taking the steps needed to overcome the crisis.

One of the steps that are now being taken, and that the FF Plus has been advocating for a long time, is to involve the private sector in power supply by lifting some of the restrictive regulations in that regard.

The FF Plus is of the opinion that the private sector's involvement could prevent the country from being plunged into a similar crisis again in the future.

With regard to the more recent problems at Eskom, the President confirmed that incidents of sabotage did indeed occur.

An investigation to identify and prosecute the perpetrators is ongoing. The FF Plus wants to see that the most severe penalties are imposed on them seeing as they did not only sabotage a single institution, but, in effect, also sabotaged the country's entire economy.

The President's plea encouraging households to invest in solar power systems is welcomed.

In this regard, I requested the President to scrap the monthly base amount of R938 for all households generating power, and for which Eskom applied at NERSA. He agreed that it must not be imposed on ordinary households.

Moreover, the proposed National Energy Crisis Committee must not be made up of officials only, like the various ministers of the departments chaired by the Director-General of the Presidency.

It is important to make experts from the private sector part of the Committee seeing as government has proved that it is not able to take the process forward on its own. The private sector is indispensable to making a success of this Committee's work.

The FF Plus has repeatedly voiced its opinion that the solutions to the country's power problems lie in private power generation, outside of government's direct sphere of influence.

In order to implement those solutions, though, needless administrative red tape must be eliminated and policy changes must be made, a state of emergency does not have to be declared to achieve that. This also seems to be the direction taken by the President.

The plan that the President announced is too little too late, though. It inevitably also raises the question of whether government is able to implement and execute the plan.