News of the passing of Gen. Constand Viljoen, former leader of the Freedom Front, received with great sorrow 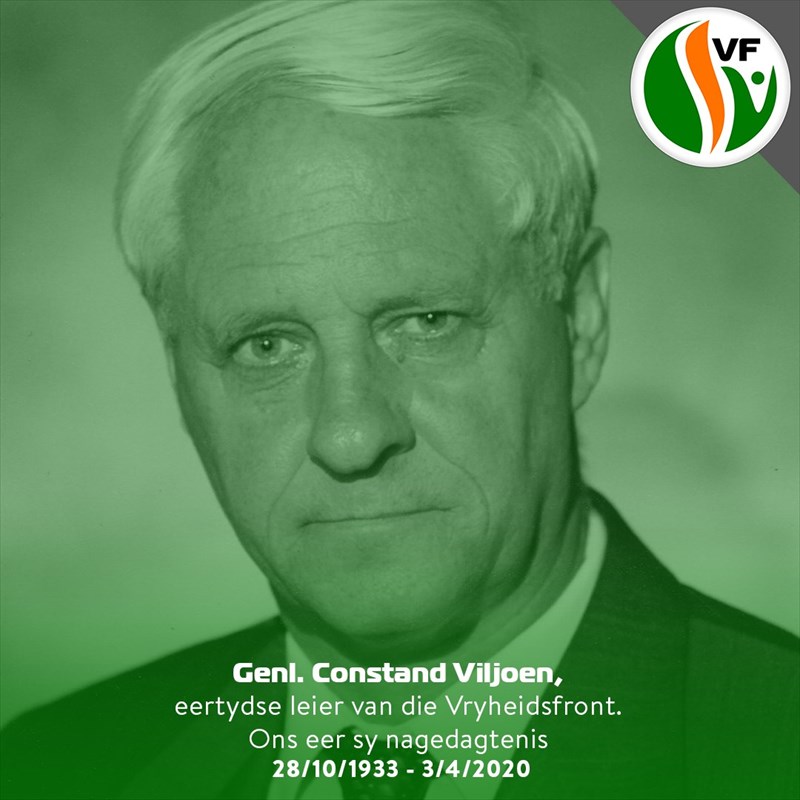 It is with great sorrow that the FF Plus learnt today of the passing of Gen. Constand Viljoen, former leader of the Freedom Front, as the party was known at the time.

The FF Plus wants to express its deepest condolences to Gen. Viljoen's wife, Mrs Risti Viljoen, and his children and loved ones.

As soldier, he was highly respected among his peers and subordinates. He was a military leader who believed that a general leads from the front and not from behind. He was sometimes criticised for this, but he certainly earned the respect and admiration of his soldiers on grass-roots level for his approach.

His achievements as militarist are well documented. It is, thus, general knowledge that he was an extremely successful general in the defence force.

As politician, he played a leading role in the political transition and to ensure stability in South Africa during that time of transition.

He often tried to use his military approach as politician as well. That evoked both positive and negative reactions. Positive, because his planning, his strategies and execution of political ideas were surely very valuable, but he sometimes also struggled as a result of his rigid, military style.

I personally told him on several occasions that in the army, everyone must react immediately and jump to attention when the general gives an order. In politics, however, one cannot give orders, one can merely make a request.

Thus, the democracy as such was to a certain extent at odds with his military training as the democracy does not really allow for rigid commands.

He was a family man and his family was very important to him and he always acted like a true gentleman toward everyone who came into contact with him.

The FF Plus herewith expresses its gratitude towards Gen. Viljoen's family for all they sacrificed for the party. Seeing as he was the very first leader of the party, the sacrifices they all made are genuinely appreciated.