Matrics 2022: Congratulations to matriculants and schools that performed well despite difficult circumstances 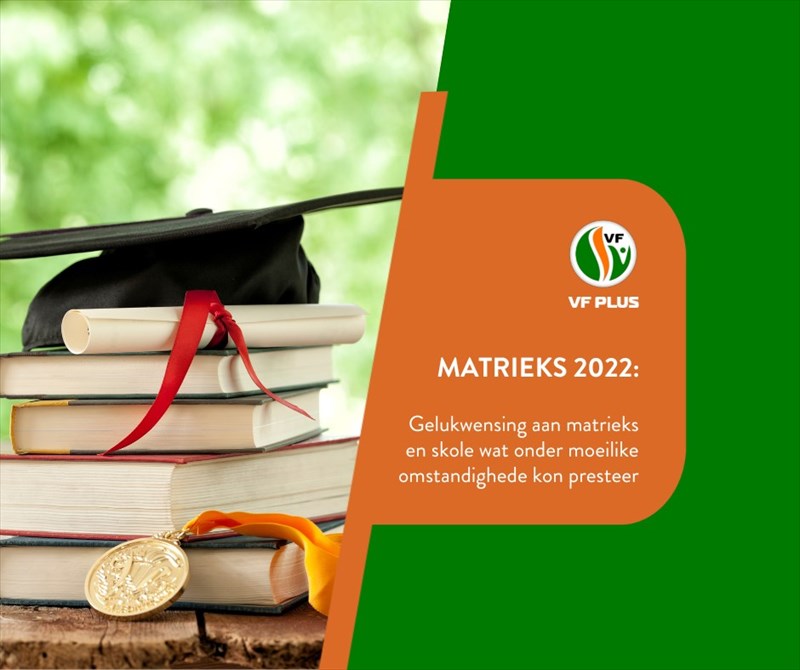 An overwhelming majority of South African matriculants are enrolled in public schools and will receive their final results tomorrow.

It is a significant milestone that most learners look forward to from Grade 1.

It is an honour for the FF Plus to heartily congratulate all the successful candidates, their parents and the schools where they were educated.

At the same time, unsuccessful candidates are encouraged to write supplementary examinations or, if need be, to repeat the grade. After all, the expression goes: "Perseverance will be rewarded!"

This year's matrics deserve special mention seeing as they bore the brunt of the Covid-related restrictions.

For many people, the National Senior Certificate, or matric, marks the end of childhood when one embarks on the journey of adult life.

That may very well be the social reality, but the economic reality is that this qualification grants one access to post-school education and training, while many employers require a matric certificate even for entry-level positions.

Although the National Senior Certificate is a highly standardised qualification, it is offered by widely diverse educational institutions.

The greatest inequality is not between schools in rich and poor areas, as is so often claimed. It is between schools where the teachers and communities, through the school governing body, are dedicated to education, and the rest.

Educational systems are often evaluated according to two measures: the rate at which Grade 1 learners reach matric, and the matric pass rate. Nearly a third of this year's Grade 1 group was lost along the way, while the pass rate of those still in the system is 80,1%, which is an improvement of nearly four percentage points on last year.

Pass and fail do not reflect performance. Learners can distinguish themselves from a mere pass with a Higher Certificate, Diploma or Bachelors pass.

This shows that too great a percentage of successful matriculants may still struggle to continue their studies or be employed.

This raises the issue of the measure of success, which is often overlooked: the success of matriculants after obtaining their qualification.

A youth unemployment rate that obstinately remains at around 50% serves as a shocking testimonial.

This is a problem that cannot be resolved by making small changes to examinations, it requires a completely new way of thinking about education and training.

Overfull schools, poor sanitation, absent teachers and allegations of positions for money are some of the unresolved matters still paralysing parts of the educational system.

On the other hand, there are schools whose parents use after-tax money and make great sacrifices to ensure that their children get the best possible education.

There are even learners who work after hours to pay their school fees.

In light of this it makes no sense that the Department of Basic Education wants to judge all schools by the same yardstick with its proposed Basic Education Laws Amendment Bill (the BELA Bill).

The Minister, Ms Angie Motshekga, even admitted under pressure that Afrikaans schools are specifically targeted by the Bill to change their language of instruction.

The Gauteng Premier, Mr Panyaza Lesufi, is infamous for his statements regarding the matter.

The FF Plus is of the opinion that the Minister must rather allow successful schools, regardless of their language of instruction, to gain even greater independence.

As such, manpower and funds from the national and provincial departments are made available to bring the rest of the schools up to the same standard. And this applies to both appropriate facilities and staff.

The FF Plus, like many other parties, recognises the key role that education plays in solving socio-economic problems and helping people reach their full potential.

It is primarily a cultural function. That is why the party strives to change the educational landscape so that cultural groups that wish to do so can take control over their education.

In fact, cultural councils, as provided for in the South African Constitution, may be better positioned than provinces to provide quality education.

Amid all these differences, education still revolves around our children. So, the FF Plus commends every single adult who is giving it their all, and every child who seizes the opportunities available to them.