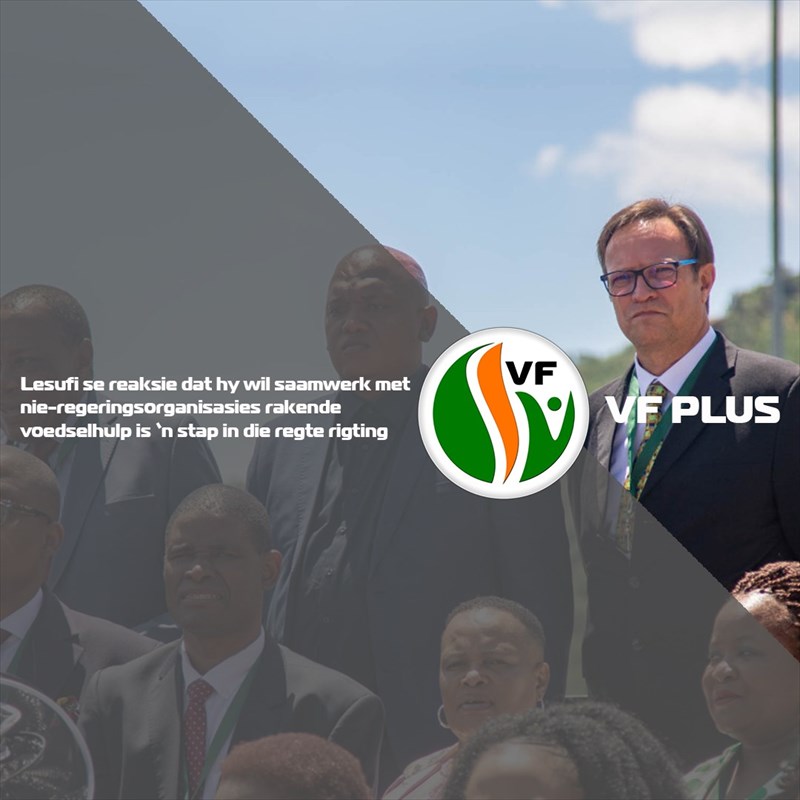 According to media reports, Panyaza Lesufi, the acting Gauteng MEC for Social Development, had indicated that the work performed by non-governmental organisations (NGOs) is indispensable and that he would like to engage with them to find common ground.

This follows after the FF Plus sent a letter to Premier David Makhura (see below) in which the party warned that the political leadership who authorised the centralisation of food aid in Gauteng could be held personally liable on civil and criminal grounds if any destitute persons were to die of starvation or starvation-related causes.

The letter was sent to Premier Makhura after Lesufi decided that all food aid in Gauteng should be centralised and as a result, all donors and those offering assistance would have had to first obtain an authorisation letter from the Department of Social Development in addition to the standard permit.

The FF Plus warned that the guidelines or directives requiring such an authorisation letter are unconstitutional seeing as they are in contravention of Section 11 of the Constitution, which guarantees the right to life.

At the moment, there is a greater possibility that someone may die due to starvation or starvation-related causes than due to the Covid-19 virus.

The bureaucratic red tape caused by centralisation will only delay the provision of emergency food aid and, thus, increase the probability that people will starve or die.

As matters stand, the Gauteng government's food aid programme is already unable to cope with all the needs, not to mention a centralised system which requires numerous authorisation letters to be issued.

The need has increased drastically because more and more middle-class people and their families are starting to share in the plight of the poor. Therefore, civil organisations and other institutions that endeavour to provide aid must rather be viewed as social partners and angels that aim to complement the government's own food aid programme.

The Gauteng government must rather focus on training organisations on how to safely distribute food and must then allow these organisations to continue with their work for the sake of all the destitute in Gauteng.

The FF Plus will monitor the process to ensure that NGOs are afforded the freedom to continue with their work.

I would like to urgently discuss the above matter with you.

This guideline presents a number of problems with regard to getting aid expeditiously to beneficiaries who are in dire need. The need for food assistance is growing exponentially while conversely the ability of the Gauteng government to provide such assistance continuously just in time is decreasing. This disjoint between the need and ability to meet it is of grave concern from both a humanitarian and security perspective. Communities are growing restless as the pangs of hunger continues to grow. Under such circumstances people will do anything to survive.

The introduction of new bureaucratic hoops to jump through for aid organisations in the form of authorisation letters only serves to exacerbate the situation of the delivery of food before a community takes the law into their own hands. Given the scope of the need in Gauteng - the poor and homeless now joined by the middle class - it is an impossibility for the Gauteng government to ensure distribution to all those in need. The ability of the government to effectively process authorisation letters with due haste is also a great matter of concern. Furthermore, there is not clarity whether the guidelines also endeavours to pull individual donors and givers into its orbit.

It is, therefore, our concern that these guidelines will lead to the exacerbation of an already human-made calamity of hunger and hunger-induced sicknesses as part of the response to COVID-19. It is our view that at the moment the weight of probability of dying from hunger and its effects is far greater than that of COVID-19. And irrespective of what the science or models might say to the contrary, communities will most certainly view their hunger plight as the most immediate danger and concern and will act accordingly. Should law enforcement be deployed in those circumstances, basically innocent hungry people will be criminalised for the mere act of trying to survive. This will present one of the greatest travesties in our history that will dwarf Marikana and Life Esidimeni.

While there are humanitarian considerations to cease the authorisation practice, the law will also weigh in. Our view is that the law will side with the hungry communities in this regard as the right to life in terms of Section 11 of the Constitution is paramount and no legislation or any derivative rule can override this non-derogable right. The conclusion is that any rule that overrides people's ability to find a way to survive by receiving donations without it being sanctioned by the state, will be unconstitutional. The corollary of this right is that should the Gauteng government assume the sole responsibility to provide food and/or authorise the provision therefore, any mistakes that lead to the non-provision of food will open the government to legal attack, including holding the executive members personally liable, not even to mention possible criminal liability. There are also other legal arguments which I am not going to mention at this stage, but suffice to say the arguments are numerous.

As such, we request that the Premier re-evaluate these guidelines and view all organisations and individuals who endeavours to care for the hungry as social partners and angels, not mere entities that deserve to be regulated. Given the fact that these angels work in support of the Gauteng government, a new approach should be considered. As it stand, many organisations are now considering withdrawing any donations due to the onerous central control system. They have requested myself to engage with you in this regard to find a new balanced path to ensure that we can save all of the hungry people in our province.

It is our considered view that the government hold workshops with all their social partners and donation organisations to provide training in responsible care giving and food provision. They should thereafter be left to their own devices to assist where they can as community-based organisations know where the true needs are. The government would then deliver assistance where such need was registered with its front office. These two systems will rarely overlap, but even where they do, it is our view government cannot prohibit other actions to alleviate the plight of the needy.

The new system of authorisation is unsustainable and cannot work under any circumstances due to the scope of the needs. A partnership approach is the only way forward.

We hope that you will receive our letter in the good spirit we have intended it to address this matter and that we can engage in finding a lasting solution to the benefit of the hungry people of Gauteng.