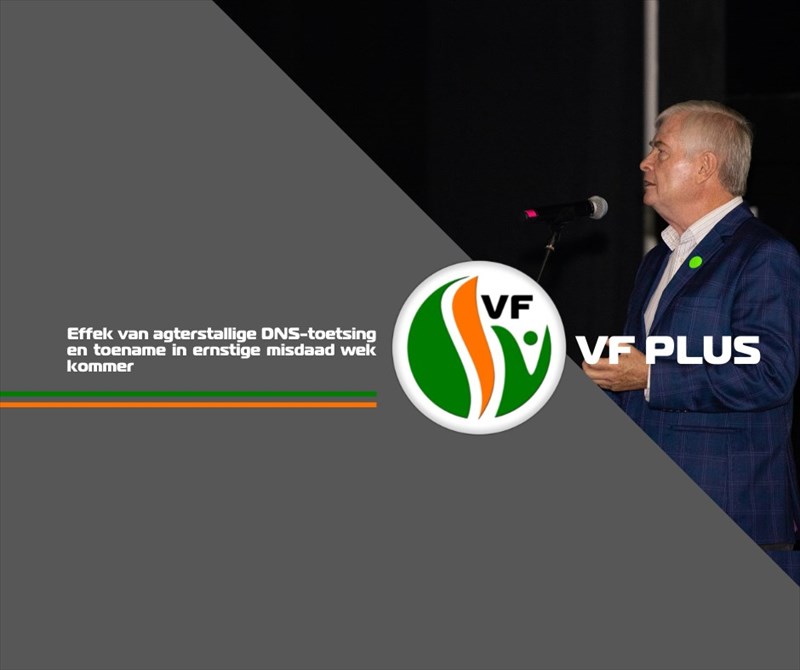 The country's crime statistics for the first three months of the year, announced by the Minister of Police, Bheki Cele, this morning, do not carry much weight seeing as the serious backlog with DNA tests in the police service greatly hamper convictions and, thus, lets victims down.

Although the figures show a decrease of 8,5% in contact crimes, such as ordinary assault and robbery, the sharp rise in murder (8,4%) and attempted murder (8,7%) is alarming.

The same goes for the murder of twenty-four police officers during this time period. Eleven of these were murdered while on duty. It is a dangerous trend that takes root when a country's police force itself is targeted by criminals and it demonstrates contempt for those tasked with enforcing the country's laws.

According to the statistics, eleven people were killed in farm attacks. Four of them were farmers or farm-owners. The FF Plus is again calling on farming communities to intensify their safety and security networks seeing as the police's rural safety strategy is struggling to get off the ground.

The unprecedented sharp rise of 21,5% and 16,9% in murder in the Eastern Cape and KwaZulu Natal, respectively, is a serious cause for concern and warrants special attention.

Equally alarming is the fact that 1 327 of the 4 976 murders committed this year took place in the victims' own homes. This type of crime is the most feared of all crime because people do not even feel safe in their own home, despite its supposed security.

When it comes to rape, the police force is failing victims in more than one way. Although Minister Cele boasted that there was a 4% drop in rape incidents, 9 518 rapes still took place, and in most cases, the perpetrators will probably get away with it seeing as the police laboratories are unable to conduct DNA tests. To prove that someone is guilty of this type of crime, DNA test results are indispensable.

The Minister is also misleading the public by saying that progress is being made with catching up on the backlog with these tests. In fact, the problem could soon be exacerbated by a lawsuit regarding the intellectual property rights of the system used in conducting the DNA tests.

The decline of 11,1% in livestock theft cannot be ascribed to the police's good work alone as it is mainly due to the cooperation and joint efforts of the police and organised agriculture to combat this type of crime. It is welcome news, nonetheless.

A nagging thorn in the police's flesh is the high incidence of ordinary and serious assault and particularly the role that alcohol plays in this regard.

According to the figures, there was a decrease of 9% in all types of assault incidents, however, a staggering 75 000 incidents were still reported in the three-month period. In 2 855 of these cases, alcohol played a significant role and 2 047 of these incidents took place at establishments that sell liquor. This lays a great and unnecessary burden on police manpower.

The constant rise in this type of crime is indicative of the fact that a country's economy is weakening and it is a very dangerous trend indeed.