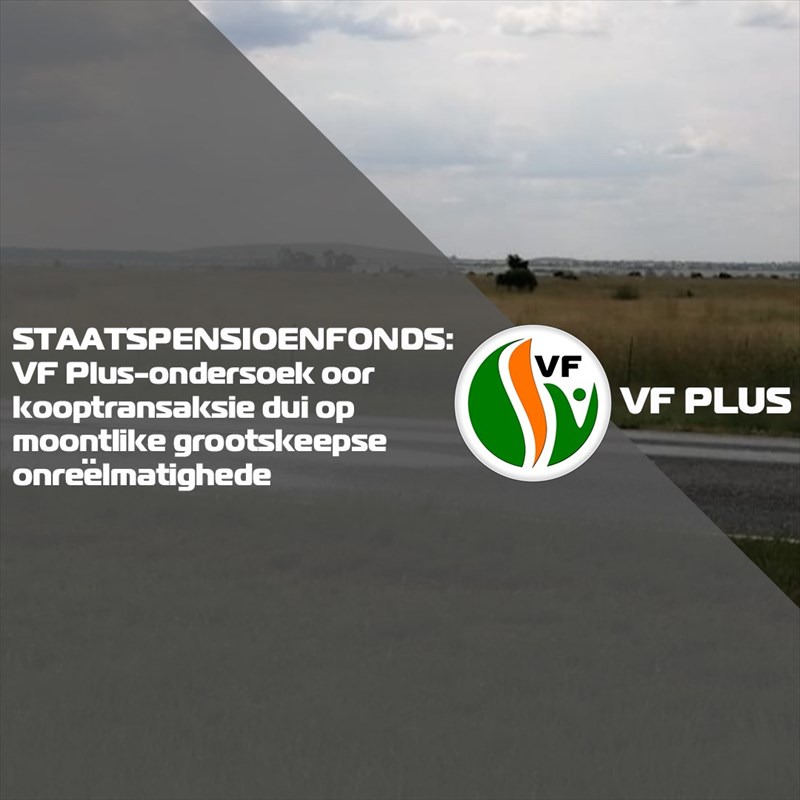 The FF Plus will ask The Hawks to launch an investigation into a transaction in which money from the Government Employees Pension Fund (GEPF) was used to pay an exorbitant amount for the purchase of two farms that make up just more than a thousand hectares.

The FF Plus went to investigate to determine whether there has been any development on the land, but at first glance it seems that no development has taken place. The farms border on the N12 between Stilfontein and Klerksdorp.

The transaction was carried out by the Public Investment Corporation (PIC), which is already under investigation on various levels due to its reckless spending of GEPF money. The FF Plus can also confirm that the Competition Commission approved the transaction.

This raises serious questions about the chain of decision making and approval in this transaction. In addition to the investigation that the FF Plus will request The Hawks to conduct, the party will also do its own investigative work into the dubious investments that the PIC has made using GEPF money.

According to the Farmer's Weekly, the purchase of the two farms was finalised between 16 and 22 June last year (2019) and the owner of the land was the controversial company Isago@N12 Development (Pty) Ltd.

Isago had been involved in a previous transaction where more than R200 million of the municipal councillors' pension fund was also used to purchase land. In that case, the court found that R110 million more than the land's value was paid and Isago was instructed to pay the excess back to the fund.

The transaction, however, still resulted in the fund being placed under curatorship. The FF Plus sees shocking resemblances between this previous transaction and the latest one where money from the GEPF was used.

The FF Plus insists on answers to the following questions: why did the GEPF pay such an exorbitant price for the land, who authorised the transaction and when and for how much did Isago purchase the land initially? In terms of purely agricultural value, there is no way that the price paid per hectare can be justified.

There have been various questions regarding the use and possible misuse of GEPF money in the past and these have set the alarm bells ringing. In the FF Plus’s opinion, this latest transaction is undeniable proof that money from the public officials' pension fund is being misappropriated.

Apart from its own investigation, the FF Plus will also keep a close eye on the investigation by The Hawks to ensure that any possible corruption is uncovered and that the guilty parties are charged and duly prosecuted. The rampant corruption and fraud on all levels have already done too much damage to the country. It must be stopped.

RT @VFPlus: No one can perform optimally when a demographic model determines career success, regardless of one's performance.