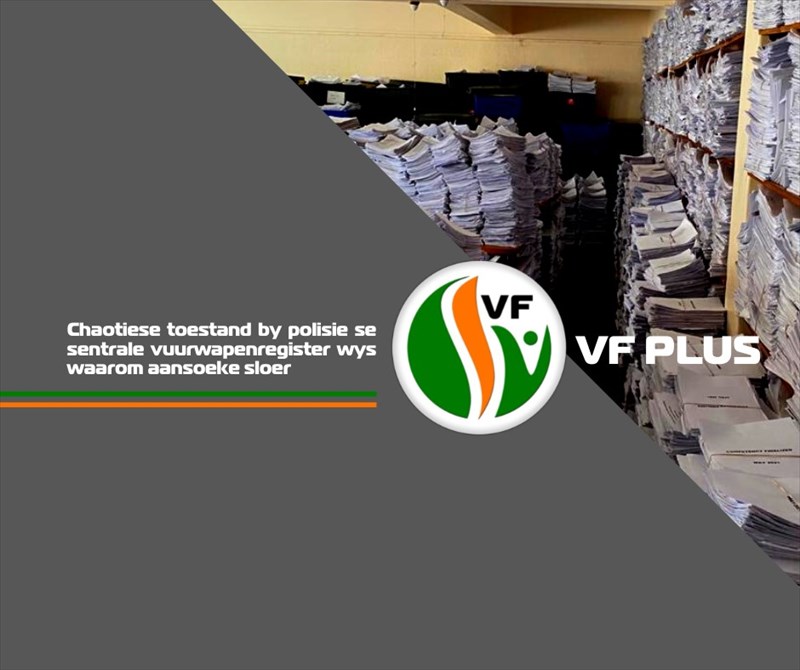 The chaotic and disorderly state of the police's central firearms registry demonstrates why the progress with applications for firearm licences and competency certificates is so slow and has basically ground to a halt. (Photos attached herewith.)

There does not seem to be enough space to keep the large number of forms and there is no sign of any functional filing system either. Should an individual lodge a query about his / her documentation, it would be a tedious, if not impossible, task to locate the forms in question.

The problem is exacerbated by the facility as well. It is unsafe and inadequate. There is a lack of proper maintenance and there seems to be a structural problem with the building as the walls are cracking, which poses a serious safety risk. Truth be told, the building should be evacuated.

The structure was probably not designed to carry the weight of the large quantity of documents. And on top of that, there is a rat infestation in the offices.

When the new firearms legislation was implemented, I warned that the legislation would place a heavy administrative burden on the police service that it will not be able to handle. So, this problem has been a long time coming. The police itself has admitted that some of the applications are more than two years late.

Initially, the goal was to finalise an application within 90 days. When the Covid-19 pandemic arrived on the scene, it was extended to 120 days. But even with the extension, the goal is obviously unattainable.

The FF Plus is of the opinion that the current legislation must be amended. At present, there is too much administrative red tape related to firearm licensing. Firearms should be licensed only once and there is no need to renew the said licence every five years. The same applies to competency certificates.

In addition, a proper electronic system must be implemented – much like the one used by the revenue service – to facilitate fast and efficient processing and to allow personnel to continue working, even from home. At the moment, management is poor and a lack of personnel only exacerbates the problem.

Another solution would be to privatise the entire system. In 2010, the then Minister of Police, Nathi Mthethwa, established a task team to investigate the problems with the licensing process. Recommendations were made, but no action was taken.

In March this year, the deputy Minister of Police, Cassel Mathale, paid another visit to the central firearms registry and pointed out serious shortcomings with the current Polvin system, which result in information being stored incorrectly.

The matter calls for urgent attention. The police service is letting all firearm owners and traders down seeing as an essential service that must be provided to the public is currently not being provided.