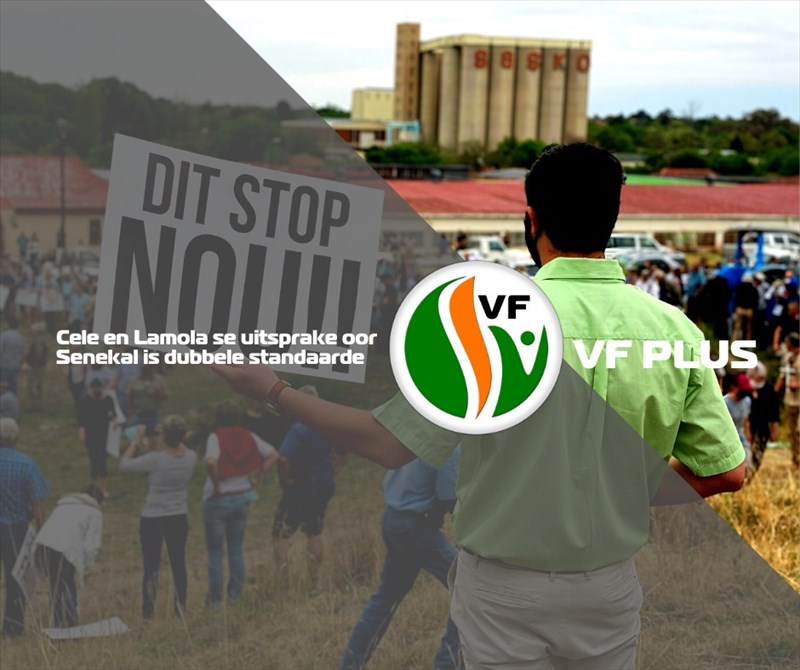 The statement by the Minister of Police, Bheki Cele, that he is "shocked and disgusted" by the behaviour of farmers who gathered outside the court in Senekal as well as the statement by Ronald Lamola, Minister of Justice, that such conduct amounts to "anarchist violence" which will not be tolerated are clearly a demonstration of double standards.

These same ministers did not make any strong condemning statements about the EFF's conduct when the EFF plundered Clicks stores. Thus, they have double standards for the farmers and for EFF members.

The FF Plus is of the opinion that violence is not the solution for the problems in the country. It is also wrong to try and paint the gathering at the court in Senekal as a violent protest action.

That was not the case and the only violent incident that did occur was isolated after farmers had been provoked. Their behaviour should, therefore, be viewed against that background. Still, violence is not the solution in these circumstances.

Video footage clearly shows that the police's conduct, particularly the use of shock grenades, was needless and comes down to provocation.

If the event is considered in broad terms, it is clear that the crowd, consisting of all races, was serious about ensuring the safety of farmers and they even prayed together for farmers' safety.

Therefore, it is a misrepresentation to portray the gathering as being violent and lawless.

The Minister of Police should rather focus on doing his job. Back in January, comprehensive evidence of serious crime in the area was handed over to the police, for example, the activities of livestock syndicates.

The police were supposed to give this information to The Hawks, but it apparently did not happen, seeing as no action was taken. The farmers are of the opinion that the murder of Brendin Horner (21) could possibly have been prevented if the police and The Hawks had taken action.

This links to the fact that no action was taken after the information was handed over to the police earlier this year.

As the leader of the FF Plus, I demand that Bheki Cele must investigate these allegations immediately and that arrests must be made if there is any truth to the claims.

The reason why emotions run high when it comes to farm murders and attacks is directly related to the fact that President Cyril Ramaphosa denied that farmers are being murdered in South Africa in New York in 2018.

Add to that the constant demonising of farmers and accusations that they stole the land, the unrelenting attacks on the lives of farmers and their families, the cruelty associated with farm murders, the recent statement by Cele, which he now suddenly denies, that farmers must not complain if they get hurt and it all culminates in circumstances that drive farmers to an emotional breaking point.

The FF Plus is calling on farmers to stand strong against this onslaught. As the leader of the FF Plus, I want to tell farmers that we will solve these problems together. Not with violence, but with reason, fairness and justice.

Part of this approach is to put pressure on the government, to take full responsibility for rural safety and to take decisive steps to solve the problems and not to make matters worse with rash behaviour and statements.

The FF Plus also takes note of the threat by Julius Malema, EFF leader, that he and his "soldiers" will gather at the next court session on Senekal under the smokescreen of wanting to "protect property".

After the EFF's conduct in the Clicks saga, this is clearly just incitement in the highest degree and it is also clear that the EFF is looking for needless confrontation.