ANC-controlled Ditsobotla municipal council to be dissolved; FF Plus welcomes opportunity for change of government 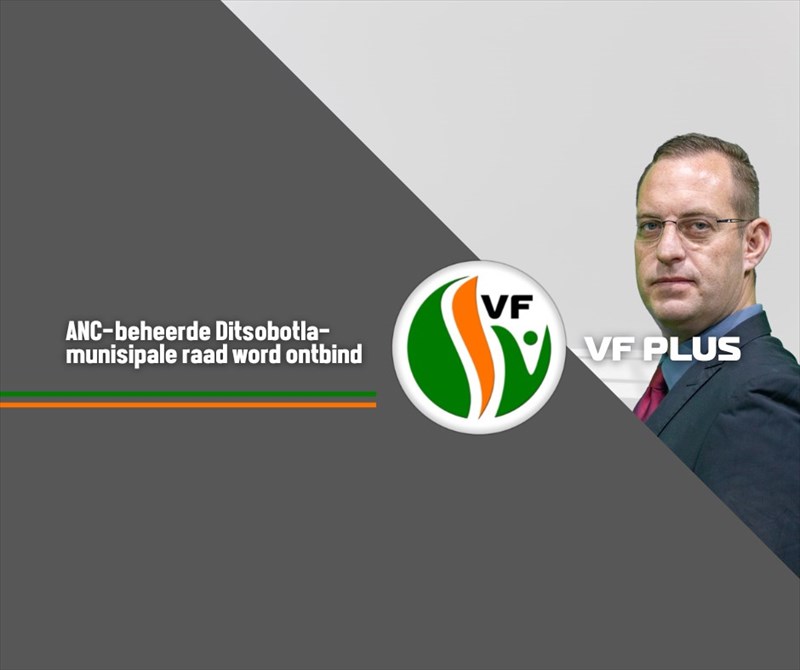 The FF Plus welcomes the announcement by the North West's Provincial Executive Council that it intends to dissolve the dysfunctional ANC-controlled municipal council in the Ditsobotla Local Municipality (Lichtenburg, Coligny and Bakerville).

The residents of Lichtenburg and the surrounding areas have had to make do without service delivery for a long time as a result of the chaotic state of the Municipality.

Ditsobotla is characterised by mismanagement and instability brought about by ongoing ANC infighting.

It has even resulted in parallel structures within the municipal council and administration, each with its own ANC mayor, speaker and municipal manager.

It has also resulted in unprecedented levels of corruption and the looting of municipal assets.

The fact that the ANC provincial government has repeatedly tried in vain to intervene in the Municipality also highlights the deep-rooted culture of lawlessness, corruption and misappropriation, which has become characteristic of the ANC in all municipalities.

The situation in Ditsobotla also proves that the ANC has lost all control over its own structures.

Meanwhile, the residents of Lichtenburg, Coligny and Bakerville are left witnessing the utter decay of their towns under these chaotic circumstances every day.

The planned dissolution of the municipal council is a light at the end of the tunnel.

Voters will soon have the opportunity to elect a clean and accountable municipal government.

It is an opportunity that all voters in the area must make the most of.

The residents of Lichtenburg, Coligny and Bakerville must not remain at the mercy of local ANC factions and politicians who only serve their own interests.

The FF Plus is calling on all voters to ensure that an accountable municipal council is elected that has their best interests at heart.

The people of Ditsobotla deserve better than the ANC.

The Minister of Police, Bheki Cele, confirmed in his reply to a parliamentary question from the FF Plus that since… https://t.co/u5E2PaqlTz